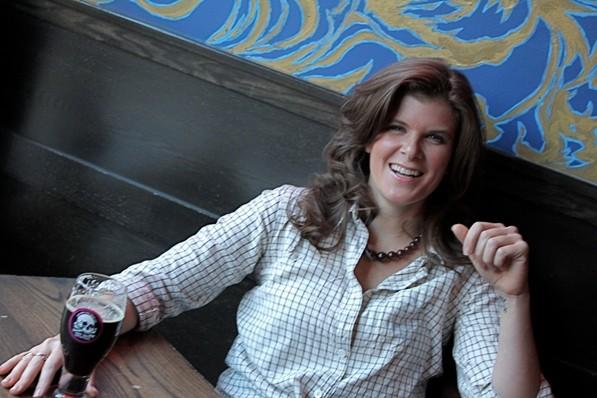 Written by Tony Peregrin for redeyechicago.com

Having a girl’s pint out in Chicago just got a little easier this fall with the launch of Barley’s Angels–a growing network of chapters around the globe for women seeking a comfortable milieu to learn about craft beer.

But don’t be fooled by the group’s name and logo–a clever wink at the jiggly, hair-model pretty crime fighters of the iconic ’70s TV show–Barley’s Angel’s is not a social beer-drinking club for women, but a serious forum for beer enthusiasts with a thirst for knowledge.

“We offer an educational aspect to our meetings, be it through teaching about off-flavors or how to pair beers with savory/sweet foods,” said Local Option bartender and Barley’s Angels Chicago chapter leader Lorna Juett. “Many women didn’t think it was acceptable to guzzle beer in our early 20s, [so] we didn’t get the education and head-start that many men get in being able to talk about what they like.

“I feel that giving women a space to learn more about styles of beer, and the vocabulary to describe the flavors that they like in beer, gives them the opportunity to explore what the city has to offer.”

It was Juett’s spirited post for Chicagoist on Chick Beer and the pitfalls of marketing such a product specifically at women (the six-pack holder is shaped like a purse), combined with some disheartening experiences she’s endured with less-than-accommodating Windy City bartenders that led Juett, 30, to organize Chicago’s first meeting of Barley’s Angels.

“I don’t think it’s too sweeping of a generalization to say that men tend to have more knowledge of beer and brewing, especially in this city, and that women are the minority in the business overall,” Juett said. “My experiences [with some bartenders] ranged from being told I wanted a wheaty, sweet beer (when I really wanted a stout or an IPA), or selecting a beer I’d seen on the menu and asking for a recommendation of something similar, only to be told dismissively to just ‘order what I know, [and that] the other beers were too weird.’

“I may have been oversensitive to how I was treated. But I would often turn around and see male customers getting drawn out descriptions of beers, and multiple tastings to get something that they liked. I found it off-putting. So, I decided to pick up mixed-sixers and drink at home, or at like-minded beer nerds’ houses.”

Eventually Juett, a resident of the Lincoln Park/DePaul area, found a bar that treated her well–and now she works there. That bar, Local Option, was the site of the inaugural Barley’s Angels Chicago event Oct. 14 that drew 14 participants and featured wheat-based beers, including five pours paired with cheese from Pastoral.

“It really was a mixture,” Juett said of the crowd at the wheat bear-and-cheese event. “We had Lincoln Park preppies like myself, hipster girls, metal chicks, curd nerds [cheese lovers] and beer chicks. It was a great group of people, all of whom were just super-enthusiastic about beer and learning. I know I left the event with a better understanding on how cheese and beer work together–even better than wine and cheese in some instances.”

Men are not permitted to attend Barley’s Angels events unless they are servers or information presenters.  Any beer enthusiast who identifies as a woman is welcome as long as you’re 21 years of age, Juett said.

“Having an all-women group just seems to make for a more comfortable place to make mistakes, try new things and talk about what you’re tasting,” she said.

There are other ladies-into-lagers groups in Chicago, most notably Girls Pint Night Out and the Association of Beer Vixens. Juett’s decision to start the Chicago chapter of Barley’s Angels was based, in part, on the resources and infrastructure afforded by a large, global organization. Barley’s Angels, founded in February 2011, has 26 chapters in five countries (U.S., U.K., Canada, Australia and Argentina).

“Thankfully, the ladies of beer I’ve met are supportive and receptive to the group,” Juett said. “What drew me to start a chapter of Barley’s Angels instead of joining a smaller group here in Chicago, was that you have the support of a national organization to push you along and help you when you need assistance. They promote the events, and help recruit members.”

“The craft beer community is supportive in general,” she added. “And I feel these ladies are even more open to help each other out because we’re the underdogs.”

As more individuals refine their palettes, not just for ale, but for food as well, interest in learning more about craft beer will continue to hop.

Chocolate and beer will be the focus of the Barley’s Angels second event at Katherine Anne Confections on Wednesday.

“Katherine Anne is incorporating Oskar Blues Ten Fidy into either a drinking chocolate or a stout right now–and I simply cannot wait to try it,” Juett said. ” Katherine also has a knack for making odd pairs seem effortless by incorporating spice, savory elements and unexpected surprises into her chocolates. I think this [event] won’t even be a challenge for her!”

Juett calls Chicago a “great beer city” both in its overall attitude toward beer and in terms of what is brewed regionally.

“However, my experience at some bars was that even if they had the most amazing taps in the city, those serving the beer might not have the knowledge, or the interest, to guide new beer drinkers into a beer they like,” she said.

And that’s where Barley’s Angels comes in.

Cue: the final scene of virtually every episode of “Charlie’s Angels” and Charles Townsend offering his congratulations for a job well done.