2010 is the 30th anniversary of Sierra Nevada in Chico, California, and they will mark this anniversary all year long by celebrating the new wave of brewing that started even before Sierra was founded.nation. Sierra Nevada joins other new and better brew pioneers to benefit select charities. Obviously beer drinkers across the country will also benefit and, obviously, celebrate.

The first four beers planned for this series of collaborative projects with America’s craft-brewing pioneers: Fritz Maytag of Anchor Brewing.

The second with Jack McAuliffe, who started the first California brewery to get a new license after prohibition: New Albion Brewery. New Albion didn’t last long, though their beers were revived this past year by one of the former brew masters who started working for free at Albion as a U.C. Davis student: Don Barkley, who is now a brewer at Napa Smith.

And the third collaboration beer will be with authors, homebrewers, and beer advocates Fred Eckhardt, and Charlie Papazian. 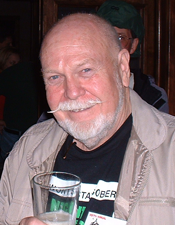 As one site claimed…

“Together, this group is credited as ‘the men who launched a thousand breweries;’ and without them, our current day craft-beer-renaissance might never have happened.”

“We wanted to pay tribute to the original pioneers who helped me and hundreds of others get started,” said Sierra Nevada founder Ken Grossman. “Few people in the craft-brewing world have accomplished more than these guys, and we thought it might be fun to get the original crew together and make something special.”

The fourth beer will be a barrel-aged blend of various Sierra Nevada beers.

Anchor Brewing Company in San Francisco was the logical place to start this collaboration: they were the first of the pioneers: 1965 according to one site… 1969 according to another. Anchor is the sole survivor from a time when few brave souls dared to venture a AB, Miller and a few somewhat smaller breweries dominated market. Fritz Maytag bought the historic San Francisco brewery: Acme, that brewed the still popular Anchor Steam. But he didn’t stop there.: he reintroduced mostly forgotten styles like Porter and Old Foghorn Barley Wine long before most of today’s craft industry was around. More than any in that time: a true pioneer.

They met in December 2009 to reminisce…

“I feel honored to sit at the table with these guys,” said Grossman. “Without the help that these guys gave me in the early days, I never would have gotten started. Each of them has shaped craft beer in some meaningful way, and without them, who knows what American beer would be today?”

The beers will be released periodically throughout the year, starting with the first release in March, and continuing until Sierra Nevada’s 30th Anniversary on November 15. These limited-release 750ml cage-and-cork bottles will be available at select retailers and beer-centric bars.

These beers will be much more than just a tribute. Proceeds from the project will go to benefit select charities chosen by the four pioneers. They will be available in limited edition; corked with a metal cage over the cork and bottle top: champagne-style bottles.

Sierra Nevada no slouch in the avant garde brew scene. From a humble hand-built brewhouse in 1980 they were key to starting some of the latest trends; like fresh hop beer; with hops even flown in from New Zealand or collaboration brewing. Their Pale Ale outsells every other brew in the craft industry.

Fritz Maytag started when he was pretty much a party of one. By the time Sierra Nevada came on the scene there were 50 in the United States. Now there are about 1,500 craft breweries, depending on how you count them. Some of the preexisting, smaller, breweries have switched to craft brewing, and would be extinct if not for the new wave of brewing. Some stats cover them, some do not.

There have been several collaborative efforts recently, including Sierra Nevada and Dogfish, or Not Litigation Ale: Russian River Brewing and Avery. The Sierra effort is special and important because it offers many different collaborations with the pioneers of the craft brew industry, but a portion of the profits are set aside for many; select, charities. As of yet specific charities have not been named in the various stories on this effort, most likely an ongoing discussion between the various brewers and breweries involved in a project that has been sometimes simply been referred to as “30.”

What other collaborative efforts there may be have yet to be released. Thirsty craft beer lovers are waiting in anticipation.

This article, while written by Ken Carman, includes information from various sources including bevindustry.com, beernews.org, thefullpint.com, websites owned by the breweries and Mr. Carman’s knowledge regarding brews and the industry in general.