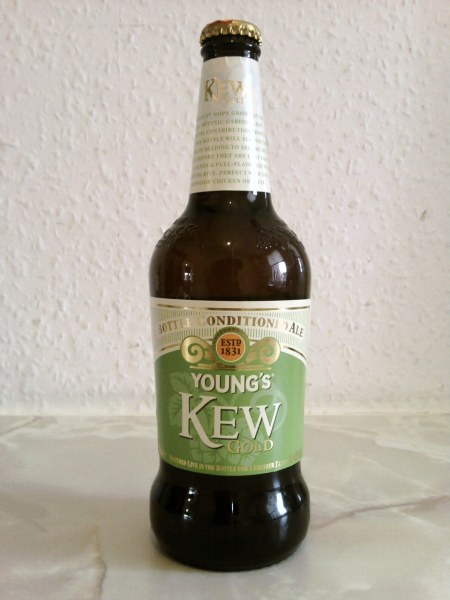 THE Bethnal Green Food Center has been useful lately. Over the last few weeks, they’ve sold more bottle conditioned British ales than I knew existed. Here is my most recent purchase. A £1.99 pence bottle of Young’s Kew Gold.

This is the same Young’s that brought us Special London Ale and Luxury Double Chocolate Stout. And part of the same Wells & Young’s behind Banana Bread Beer and Bombardier Satanic Mills. As such, hopes are high and the bottle looks very familiar.

Why do I like bottle conditioned ales? Who wants yeast floating around in their drink? Simple. It turbo-charges the flavour, and it’s divisive. And that makes for interesting comments at the end of this post.

Back to this particular bottle, and the neck-label is where a lot of the detail lives.

It informs us that it was “inspired by hops grown at the Royal Botanic Gardens, Kew.” And that some of the money from each sale of this bottle, goes to support Kew. I like that fact, because it muddies the waters for people who like to take a moral stand on beer.

Lastly, they describe it as “Light, golden & full-flavoured with a refreshing bite.” And that it is “Perfect with grilled marinated chicken or pasta”. That all sounds very run-of-the-mill for an ale. Where’s the quirkiness and imagination?

The small-print lives on the back of the neck-label.

And it’s almost identical to the small-print on every other Wells & Young’s bottle of beer. Is has their full, Bedford postal address. It has their web address of www.wellsandyoungs.co.uk. But this one has one more. Because of the Kew connection, it also has the address of www.kew.org. (See post previous to this- Prof. GA) If you want to know about the Royal Botanic Gardens at Kew, it is a very good website, indeed. I’ll have to re-visit it when I stop being young.

With the neck-label done, it’s onwards and downwards to the front-label.

Although, frankly, there’s not much reason to look down here. It’s pleasant and green looking. There’s a simple picture of a bunch of hops. And the live, bottle conditioning is the main marketing point. “Bottle Conditioned Ale” takes pride of place above the Young’s 1831 rams head logo.

Along the bottom of the label is the main selling point: “Matured live in the bottle for a fresher taste”. Along with the vital statistics either side. That this is a typical 500ml bottle (why not a proper pint?) with a modest 4.8% alcoholic volume.

Next is the back-label. Again, much the same as the back-labels for most other Wells & Young’s beer, so I won’t waste your time by going through every tiny detail. 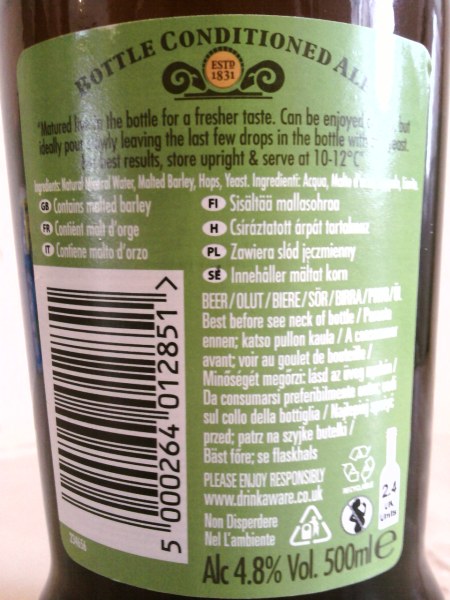 Helpfully, the back-label opens with a bit more detail. Their choice of words for the benefits of bottle conditioning are that it’s for a “fresher taste”. They talk about how you can pour it slowly if you don’t want it cloudy. How you should store it upright. And that it’s best served between 10 and 12 degree Celsius. By chance, that’s exactly how chilly my flat is.

Sadly, it’s nowhere near strong enough to help me get over the cold of my flat. At a moderate 4.8% alcoholic volume, and in a standard 500ml bottle, Kew Gold comes in at 2.4 UK units of alcohol.

The only other details worth mentioning are the ingredients. Well, maybe not. But here they are anyway: “natural mineral water, malted barley, hops, yeast”. Nothing suspicious. Just good, normal, ale ingredients.

So, what does Young’s Kew Gold taste like? Will I like it? And will I think you should buy it? Will the yeasty goodness be worth it? Let’s find out.

It poured easily enough. Certainly much easier than the European wheat beers. It wasn’t cloudy at all until I gave the bottle the old Bavarian-swirl near the bottle. That ‘livened’ up the glass. All without overflowing it.

True to the label description, the hue is golden. The head quickly collapsed to a network of white patches. It’s cloudy, but not overly opaque and looks well carbonated.

What does Young’s Kew Gold? Smell of? Not that much, and not very strongly. You need to give it a good sniff to detect that it’s all hops. A couple more sniffs, and you realise that it smells good, in a pleasant, hoppy way. Fruity, spicy and a bit malty are the words I’ll go with on the smell.

What does Young’s Kew Gold taste like? The first gulp started easily enough. As soon as the aftertaste kicks in, your mouth is swamped by the hoppiest taste I’ve had out of a bottle. And that brought with it that familiar hoppy bitterness. It still caught me off-guard.

A few more sips and I’m starting to make some sense of the flavours and tastes in Young’s Kew Gold. On the flavour side of the equation, there’s not much to say. It’s got a light, savoury, slightly leading bitterness. No flavours really stand out. At least none that my tongue was aware of.

The aftertaste is what Young’s Kew Gold is all about. It has a very full, hoppy, agricultural taste. At first, I was overwhelmed by it and the bitterness, but a third of the way through now, I’m not so sure. It’s turned into a light, smooth and strangely refreshing beverage. Almost a complete 180 degree from where it was on that first gulp.

Nearing half-way through, and what am I enjoying about Young’s Kew Gold? A admit it. I wasn’t expecting any surprises when I cracked it open. So I’m genuinely happy to have had a couple. I like how immensely hoppy it tastes at first. I like how that will put off the less intrepid beer drinkers, meaning you’re in an exclusive club if you’ve got this far. It also scores it points for distinctiveness. I very much like how easy it is to get used to it, and how well it becomes drinkable and smooth. I like how it’s taken the light and refreshing summery ale and put a very hoppy twist in it. And I like how it gives money to the Royal Botanic Gardens of Kew, even though I’d rather experience mild electrocution than learn about foliage.

What aren’t I enjoying about Young’s Kew Gold? That massive, initial hoppiness isn’t going to win it any lager or alco-pop friends. Personally, I’d like more interesting flavours, not just pure hoppiness. With such a hoppy beer, it would be good if the labels told us what hops and malts they used in the brew. It’s a little on the gassy side. It’s expensive and hard to find. And, here, now, in a cold flat, in winter, it’s just not right. Summer, or at least spring, is where Young’s Kew Gold belongs.

To sum up, Young’s Kew Gold is one of the hoppiest tasting ales I’ve ever tried. Do I like it? Yes, but despite myself. I didn’t want to, but it’s grown on me. Was the bottle conditioning worth it? For the distinctive, hoppy quality, yes. Should you buy it? In the right season, if you like strong, hoppy ale, if you can find it and afford it, then yes. Definitely.

One Reply to “A Report on Young’s Kew from England”