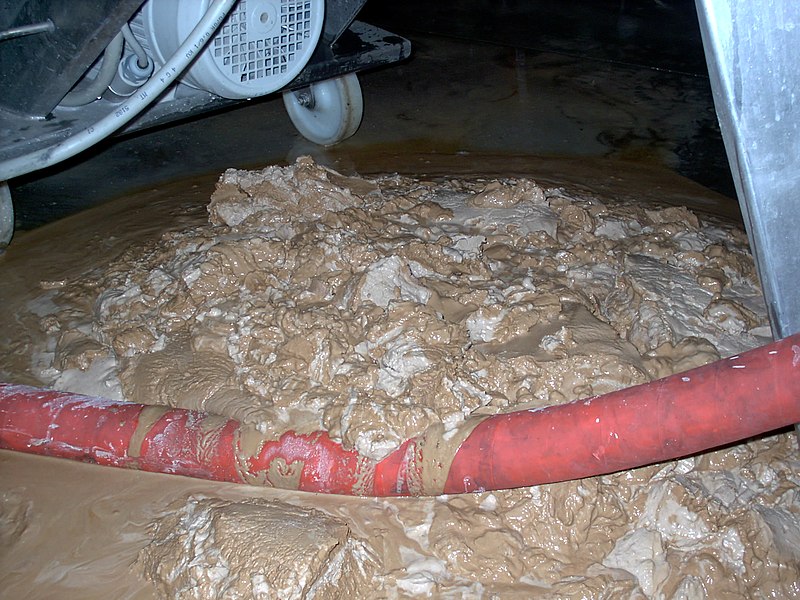 No, that’s not the Blob that ate the brewer. A mixture of diatomaceous earth and yeast. DE is used for filtering. Picture from Wiki Commons

Note: Professor GA does not recommend washing and reusing yeast that you bought in a dried form. Drying yeast stresses it. Best start with a new yeast if it was dried.

Washing yeast to reuse it in another batch of beer is a great technique to have in your home brewing arsenal. Yeast washing is a simple process used to separate the live yeast from the underlying trub (hops and spent grains) left at the bottom of your fermenter when making beer.

With the high price of hops and malt, yeast washing is a great way to save a few dollars and also build a strong yeast culture as a basis for a yeast starter. Rather than purchase new yeast each time you can wash and reuse your yeast across as many as 5-6 batches spread out over a period of months by reusing yeast from your primary fermentation.

Yeast washing is remarkably easy to do, involves minimum equipment and can be done in a short period of time. All that is required is two sanitized mason jars, some distilled or pre-boiled sanitized water and some plastic or foil to put over the jars. Sanitizing or sterilizing everything involved is critically important as yeast is susceptible to infection.

Start by sterilizing your two jars by boiling them in water or immersing them in a high quality sanitizing solution. Prepare a few quarts of sterile water by pre-boiling it and then cooling it to room temperature. Use sanitizing solution such as iodophor to sanitize the rim of your fermenter.

If possible, you want to draw your yeast sample from the primary fermenter as it contains more active yeast than the secondary. Harvest the yeast immediately after racking your beer off to the secondary, as you want to minimize the chance of contamination. The primary will contain a layer of thick trub. You need a bit of liquid to work with, so add a quart of sterile water to the primary if needed.

Swish the fermenter around several times to break up the trub and then allow it to settle for a few minutes. Pour the liquid from the top of the trub into one of your mason jars, being careful to keep everything as sterile as possible.

After collecting your yeast and trub put some foil or plastic wrap over the top and seal it with a rubber band. Put the mason jar in your refrigerator for 30-60 minutes which will help it separate. Ideally you will see a clear separation between the liquid and sediment. The liquid contains suspended yeast, while the sediment is primarily trub.

The next step is simply to pour off the liquid suspended yeast from the top of your mason jar leaving as much of the sediment behind as possible. Pour your yeast into a second mason jar, cover it and place it in the fridge again for an hour or so.

If you still have a significant amount of trub at the bottom of the second mason jar, you may want to consider mixing in some sterile water and washing the yeast again. If not, you can store the yeast for several months in the refrigerator until you are ready to brew again. If you plan to store it for an extended period you may want to consider transferring it to a flask or bottle with an airlock and keep it in the refrigerator to prevent contamination.

On the day before you brew, add some wort to your yeast create an appropriately sized yeast starter for your next batch. If you want to use your yeast across several batches you can either split your starter and store part of it for later use or repeat the entire process to collect yeast from the primary again.

If you do collect yeast across several generations, I recommend not exceeding 4-6 generations of reuse as eventually some wild yeasts or bacteria will make there way into your yeast.

Washing your yeast is a great way to save a few dollars while keeping a healthy supply of fresh yeast available for your favorite brew.