“Maybe they shouldn’t have modified my beer yeast that much?”

I admit: I may need some help regarding this from wiser brewers and judges. Genetic manipulation alone has never been my strong suite. Hey, I graduated college in 1976, and my major certainly wasn’t Science. As a judge, brewer and beer lover I’m always eager to learn more.

My cousin sent me a link to an anti-Monsanto blog that claimed beer yeast was genetically modified. I was immediately suspicious and not because of the Monsanto connection. To say that Monsanto has some rather controversial business practices is like saying, “We breath air.” A generalization and understatement? Duh.

But I’m also not adverse to all genetic manipulation. Intentional, or not, we have been manipulating for centuries at some level: slicing different strains of plants together, morphing Scottish highland dogs into rough collies, growing a whole ecosystem for Avatar. Wait. Please don’t tell me that last one was special effect movie magic. It was? Oh, now I’ll have to go to one of those support groups that help out those who are disappointed there is no Pandora like in Avatar. Sniff. Sniff.

No, I’m not kidding about there being an Avatar support group.

Now, what was I writing about? Oh, beer, that’s right!

I really don’t fear that my favorite yeast will appear in some real live Godzilla event in the future, but I might bring the genetically modified popcorn if it does. I’m not completely against genetic manipulation of our food or our yeast: as long as we bring back and institute strong testing before market, and the ability to pull productÂ off the market quickly. No more gutting of intensive testing of what we consume before we actually consume it. More. We need more testing and a bigger army of those who test, and more strict; before market, rules. If there’s the slightest, scientifically valid, question… the answer is, “No.”

No, I just don’t see why, any average brewer in a micro, brewpub or even some major breweries… please notice the qualifying “some…” would need or want genetically modified yeast. Brewers have a long history of having a house yeast. McGuires in Pensacola, for example, had the same house yeast since 1988. I think they still use the “same” yeast, or did until a few years ago. Well, sort of “the same yeast.” By the time a yeast propagates 5 or so times it’s a different yeast, except perhaps in one way. Yeast carries much of the unique flavor: house “brand,” if you wish, over to the next batch. Yeast is an incredible survivor and so treasured that Flag Porter used beer yeast culled from a ship that sunk in the 19th century. I suspect that that yeast may not be the oldest ever used. Some brewers are willing to try anything….

(Product warning: may not contain any actual Dog bollocks.)

…to praise and curse the beer Gods at the same time.

Now of course new yeast is by all means used in micros and brewpubs: not all batches have the house yeast, if there is one. There’s plenty of it out there and it’s not all that pricey by any means. Smack packs, yeast cultures and even dried yeast are in plentiful supply: easily available. The cheapest is often dried and, unless you want to use it in your next beer, it works very well. Drying the yeast stresses it out to the point that you might as well re-pitch fresh dried yeast. Why not? Less fuss, less bother and even brewers like Pioneer in Sturbridge, MA have had great success with it. Want to do high alcohol beer? There are special yeasts for that and one can always freeze and remove water. There’s so much yeast out there brewpubs often willingly give their excess yeast to homebrewers. And, as a homebrewer, if you want to mimic Guinness, you can get Irish yeast culled straight from a batch. Maybe it’s not Guinness, but it should be close enough.

And this opens another discussion-based can of worms. I could very well see how some company might genetically modify a yeast to be more like Guinness, or whatever. But… why? There are so many great sources of yeast and I would think the process would make it so expensive only the homebrewer willing to spend wads of cash for something he might get simply by buying the Irish yeast.

The whole thing makes no sense to me except in a few ways. How about altering yeast to get better head retention? But notice the following quote from the link I provided…

“…German brewers had expressed “unofficial” interest in his work but at the moment they don’t think there is much of a market for the beer because of the German public’s opposition to GM food. (Thank goodness)”

Does anyone else in the brew community suspect there may be more here to the “unofficial-ness” of the interest than simply genetically modified angst?

Here is one application amongst lagers. The length of lagering times may be annoying to some owners of brewpubs, for example; especially those with small capacities and large, thirsty crowds. But lagering times shortened by “3 days?” Hardly seems worth it. Here again, cost effective when you can produce an ale loved by these same quaffers? The question here is one of need vs. cost.

That same brewpub I mentioned before, McGuires, has brewed a very light ale in both Destin and Pensacola that keeps lager lovers coming back for more. While it’s a tad more “ale-ish,” I have seen Stone Beer at Boscos satisfy crowds as well. As a reviewer I’m been from Maine to Louisiana and many have light ales that come close, though I must admit McGuires has worked so hard on the concept they seem to have come the closest. Mr. McGuire is a Bud drinker, that’s why.

Let’s admit something here. Light ales made to compete with Standard American Lagers or Lite, and especially light lagers, are by no means my favorite quaff. When I started to flesh out this edition of Brew Biz I did some research. Wow. Someone compared the “changed” recipe for Boscos Flaming Stone Beer to “spinach dishwater?” Yum. Spinach beer. Guess I’d better try it again next time I’m there. Hopefully my usual drinking mate, Popeye, won’t have a conflict with Brutus that day. Or maybe if he’s gone back to calling himself “Brutus” he might join us for two or more? “Et… two, Brute?

Eliminating that sulfur sense I find in some lagers using “GM?” Hey, I’d be happy: having had one too many lagers with too much of that sense, I’ve “sulfured” enough. But I suspect ale lovers like myself still won’t be won over. This drive for “purity” that, in my opinion, simply substituted one defect for others, also eliminated certain “defects” in low quantities that help provide flavor. I suspect a large number of ale fans would agree.

I could see an application in the non-alcohol malt products, I suppose. And maybe super high alcohol beer, but most I’ve had are so hot and astringent I agree with pro-brewer Todd Hicks: about as palatable as “used motor oil.” It’s not the yeast, it’s the nature of the product. I suppose one could engineer for that, but why not just drink malt whiskey or some other malt-based hard liquor?

Another way is a bit frightening, I suspect, for some brewers… depending on popularity. If A/B-InBev or Coors/Miller for example, decide to have beer yeast genetically modified to create some really unique flavors, or products, that become extremely popular and threaten the craft industry, ah, “there be a swamp no one pirate brewer would wish to sink in.” I can certainly think, considering past history, certain big brewers might hear yet another Siren call: another way to squash the craft beer industry. They would have the rights to that yeast and anyone trying to use it would suffer severe consequences. Ask farmers surrounded by Monsanto farms when the wind just happens to blow a seed their way. Even just being accused of their house yeast being mixed ever so slightly with the GM yeast could have serious consequences. 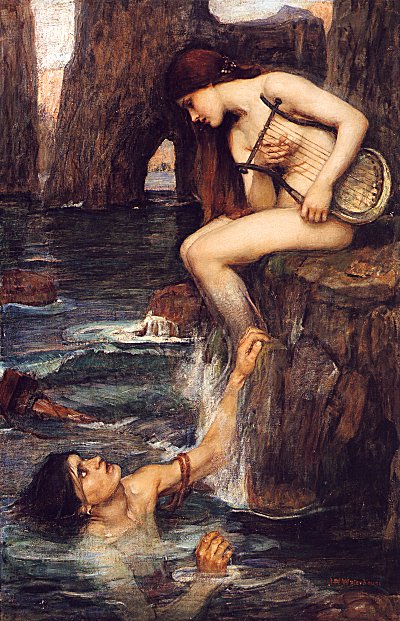 (One example of a mythological Siren, perhaps apologizing to sailor whose ship hit the rocks?)

But such not so mythological Siren calls can wind up crashing sailors and their brew-ships upon the rocks of market uncertainty. So as far as the popularity of such products? I’m not holding my breath. Big brewers have gone down this path before: making unique products that might help them dominate the beer market even more than they already do. Never quite works out that way. And often what they get, well to put it politely, is product most true beers lovers laugh at: product they will never flock to instead of drinking fine ales or lagers.

Anyone else heard of “Zima?”

One Reply to “Brew Biz: Werts and All”