“For those who are big suckers for da Gueuze pucker.” 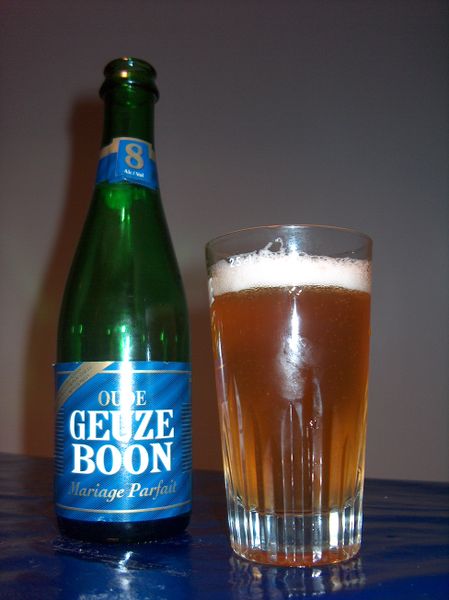 Egads! Scribe is in love. Did someone brew a beer as a portrait of YOS? As any of his beloved readers might say, Scribe’s writings are humorously sour and satirically pungent and use tongue tangy parody to grow more than a hair a day on your chest.

Such is Oude Gueuze, brewed by Hanssens Artisanaal in Dworp, Belgium, to the palette.

For those not in the know a Gueuze is a carefully blended ale using various Lambics of various ages: usually 1-3. This beer is describes in various terms that seem unpalatable by such as the BJCP, AHA and MBBSS: The Mythical Belgian Beer Sucking Society. No, that last one wasn’t real. Twere a JOKE!

Here’s Scribe’s take: sour nose with slight malt and no hops. Hops would distract. A slight haze. Light gold. The head hangs on like the taste: a bulldog bite to the tongue. Very balanced. A bit “horsey” to taste: and Scribe knows that sounds horrible. After all: who wants to lick a horse’s ^%$# except horse-o-holics? (Yeah, tis a sick perversion that involves much unmentionable oral acts: hence the age old disease “hoof in mouth.”)

If that fabled old horse gets sent to that factory, instead of crying: going “Boohoo” does he “Gluehoo?” Now THERE’S a joke that sticks to your… horse’s… ribs!

The only criticism here is Scribe wishes even this classic brewer of Gueuze could make up their minds how to spell it. Scribe’s bottle says “Gueuze.” The picture: Geuze. Scribe has gander-ed upon many various variations on spelling whatever the hell the real spelling is. If a classic brewer of the style can’t decide, who can?

Scribe could swear there’s rhubarb in here. It’s almost as if the rhubarb sour is STALKING him. Decent carbonation. Light yellow.

If you want unique and sour, tis da beer for you.