Many of them are providing samples for a gift basket of craft brews that they hope end up in the presidential fridge. 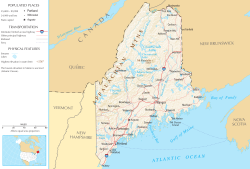 Written by John Richardson For The Portland Press Herald and mainetoday.com

PORTLAND — President Obama had better make some room in the White House fridge. Maine brewers and beer merchant Bill Milliken plan to deliver a gift basket of Maine brews to Obama later this month. No one knows if Obama will like the sampling of ales and bitters, but he asked for it.

Obama referred to Milliken during his speech at the Portland Expo on April 1, citing Milliken as a small-business owner who will be able to provide health insurance to more of his workers because of tax credits in the new health care reform law. He also had an unscripted exchange with Milliken, one of about 2,000 people in the audience at the Expo.

“Bill, stand up. That’s Bill right there. Now, I want to give a little plug to Bill here,” Obama said as the crowd cheered. “Bill owns Market House Coffee and the Maine Beer and Beverage Corporation, both here, right here in Portland. … In exchange for this publicity, I hope that I’m going to get some samples of the beer. … OK, he nodded in the affirmative.”

In addition to nodding, Milliken was trying to answer back over the applause. “I went, ‘Hell yeah, man, you kiddin?’” he said Thursday, still excited about the presidential “conversation.”

Milliken, now known as “Bill the Beer Guy” on the Internet, got calls from friends and family members all over the country who saw or read about the speech, he said.

Even before he returned to his business to put together the presidential care package, brewers were thinking the same thing.

“Nappi Distributors had already called and said ‘We’ll send four cases of Shipyard,’” Milliken said. “We figured, let’s include everybody. … This isn’t political at all. It’s just the president asked for some beer samples.”

The Maine Brewers Guild expects all of its 17 members to provide samples for the basket. “It’s a great moment for Maine and it’s wonderful for Maine beer,” said Tami Kennedy, who works for Shipyard Brewery in Portland and is spokeswoman for the brewers guild.

Fred Forsley, owner of Shipyard and president of the guild, expects the company will pitch in bottles of its Export Ale and Summer Ale, and maybe some specialty brews. “It’s great that we can get him aware of what’s happening with craft beer in the U.S.,” Forsley said.

While the basket is intended as a simple “thank you” for the president’s visit to Maine, some in Maine’s beer community hope it can win over Obama’s taste buds.

The president’s choice of Bud Light for his famous “Beer Summit” last summer – he invited a Cambridge, Mass., police officer and a Harvard professor to settle their differences over a beer at the White House – made some brewers eager for a chance to broaden his horizons.

Milliken said he sells Bud Light, but he’s sure the president will appreciate the Maine-made craft beers because “he’s a beer guy.” Milliken and the brewers plan to make the most of the opportunity. They are planning a media event for the gift basket’s send-off April 19. It’s unclear how the beer will actually get into the Obamas’ refrigerator.

“The White House has an actual gift committee that receives gifts. But this is a unique situation where the president specifically requested this,” said Paul Drinan, a friend of Milliken. Drinan is helping to coordinate with the White House and respond to the media so Milliken can run his business and recuperate from sinus surgery this week.

Milliken hopes to make the delivery in person, beer guy to beer guy.

“He asked for it. The entire Democratic establishment of the state of Maine was in that room when he said it,” Milliken said. “On the other hand, I know he’s a busy guy. He did sign an anti-nuclear peace treaty today.”