During the Civil War folks drank and played games, like the backgammon board below. But here at Professor Good Ales we’d rather…. 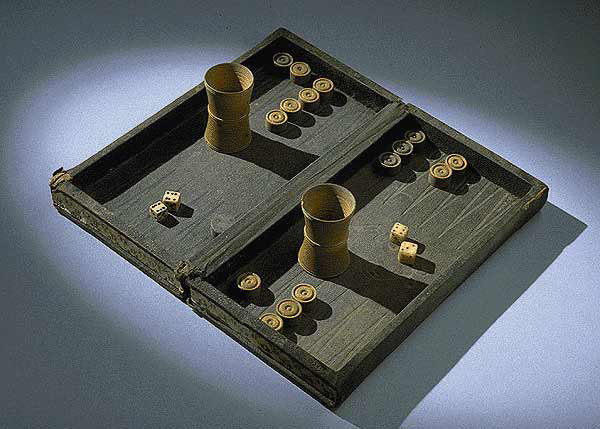 …hear about THE BEER, right? What was called “beer” during the Civil War may have had a wider definition that what we call “beer” today. Here are a few recipes from…

Wash and then pare a pine-apple; if a good size, put the rind into about two quarts of water (in the quantity you must be guided by the size of the pine-apple); cover it for twenty-four hours; then sweeten to your taste, bottle, cork, and put it into the sun for five or six hours, cool it and it is then fit for use.

From The Carolina Housewife by Sarah Rutledge, 1847

Boil a small handful each of hops and boneset for an hour or two, in a pailful of water; strain it, and dilute it with cold water till it is of the right strength. Add a small table-spoonful of essence of spruce [see note below “Maple Beer”], sweeten, ferment and bottle it, like the spring beer. The essences of hops, checkerberry, ginger, and spruce, put into warm water in suitable proportions, then sweetened, fermented and bottled, make good beer.

4 gallons water, boiled
1 qt. maple syrup
1 tbs. essence of spruce [note, we are not sure what this is, how it is made, or where it might be found today]
1 pint homemade yeast, or 2 packets or cakes commercial yeast

To four gallons of boiling water, add one quart of maple syrup and a small table-spoonful of essence of spruce. When it is about milk warm, add a pint of yeast; and when fermented, bottle it. In three days it is fit for use.

A Note on “Essence of Spruce”: An anonymous contributor tells us that commodity is made by taking the tender new-growth tips off branches of either spruce or balsam fir trees and soaking them in water or molasses until the flavor is absorbed into the liquid. Strain and save the liquid for use in recipes such as these.

Pour four quarts of boiling water upon an ounce and a half of ginger, an ounce of cream of tartar, a pound of clean brown sugar, and two fresh lemons, sliced thin. It should be wrought [left standing] twenty-four hours, with two gills of good yeast, and then bottled. It improves by keeping several weeks, unless the weather is hot, and it is an excellent beverage. If made with loaf instead of brown sugar, the appearance and flavor are still finer.

Take a handful of checkerberry (wintergreen), a few sassafras roots cut up, a half a handful of pine-buds, while they are small and gummy, and a small handful of hops. (If dried in the ordinary way. But a small pinch of the hops put up in pound packages by the Shakers is enough.) Put all these into a pail of water over night, and in the morning boil them two or three hours; fill up the kettle when it boils away. Strain it into a jar or firkin that will hold a half a pailful more of water. Stir in a pint and a half of molasses, then add the half pailful of water, and taste it. If not sweet enough add more molasses. It loses the sweetness a little in the process of fermentation, and should therefore be made rather too sweet at first. Add two or three gills of good yeast, set it in a warm place, and let it remain undisturbed till it is fermented. When the top is covered with a thick dark foam, take it off; have ready clean bottles and good corks; pour off the beer into another vessel, so gently as not to disturb the sediment, then bottle it, and set it in a cool place. It will be ready for use in two days. The sediment should be put into a bottle by itself, loosely corked, and kept to ferment the next brewing. From The Young Housekeeper’s Friend by Mrs. [M. H. ] Cornelius, 1863.