The January Club meeting will be held at Ozone Pizza at 4:00pm on Sunday January 17th. Bring Beer!

The Club’s website now has a revolving calendar that shows the upcoming months and has a link to previous months. It will be updated shortly with known events throughout the year. Please take the time to go to the site and familiarize yourself with it http://www.escambiabayhomebrewers.org/. The Happenings tab shows the future and past events that we have participated in. We will be adding to the website throughout the year to enhance its content. Let us know if there is anything you’d like to see on the site that isn’t currently on it.

The grain orders will be available for pickup on, or after, New Year’s Day.
END_OF_DOCUMENT_TOKEN_TO_BE_REPLACED

Every year the F.X. Matt Brewery; who brews the Saranac line, packages a 12 pack of 6 winter beers. (They also sell a similar summer season 12 pack.) Matt has brewed well over 100 different styles and specialty beers under the Saranac name; probably far more than any brewer of their size who was in business long, long before the craft brewer revolution. All that from a brewery older than Yuengling; if you count the few brief years before they were purchased by the Matt family and renamed West End Brewing Company, then F.X. Matt, or just Matt Brewing. Though one could argue the brewery produced what would be called “craft beer” now occasionally throughout their history long before that trend hit the American market… their current craft beer adventure really began for the brewery back in the 80s when F.X. was challenged by a German brewer; while driving the autobahn, to make beers as good as brewers in Germany did. F.X. took the challenge seriously: hence Saranac.

Here are this year’s six winter beers, four of them are brand new.

My wife and I; both BJCP judges, briefly assessed all six. Please: this is not meant as a score sheet or close to it; just general observations. In the following order: from beers we found less appealing to the best: one that should win a lot of awards.

END_OF_DOCUMENT_TOKEN_TO_BE_REPLACED

As reported by the BBC

A controversial Scottish brewery has launched what it described as the world’s strongest beer – with a 32% alcohol content.

Tactical Nuclear Penguin has been unveiled by BrewDog of Fraserburgh.

BrewDog was previously branded irresponsible for an 18.2% beer called Tokyo, which it then followed with a low alcohol beer called Nanny State.

END_OF_DOCUMENT_TOKEN_TO_BE_REPLACED

Just like the story, The Lost Abbey “Gift of the Magi” winter release beer is a holiday treat. (Courtesy photo)

By Jeff Gordon at TapHunter.com

Start a fire in the fireplace. Put on your snuggie. Cuddle up with a loved one. That’s right, it’s winter time here in San Diego. Brrrrrrrrrrr. Need some beer recommendations to combat that chilly 50 degree cold? You’ve come to the right place. We’ve picked out a few just for you. The following winter release beers are the strong, sometimes dark, cure for the wintertime blues.

Karl Strauss To The 9’s- An Imperial IPA packed with pine and citrus flavors.

Lost Abbey The Gift of the Magi- A Belgian Strong Pale Ale brewed with frankincense & myrrh.

Not So Local Selections

END_OF_DOCUMENT_TOKEN_TO_BE_REPLACED 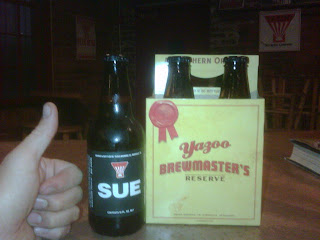 A “friend” sent this to Scribe. And if you’ve been reading Scribe for a while you know who this friend is. After other Yazoo shippings, yuletide past, Scribe was slightly disappointed. Not quite enough a Robust, not really a Brown. Certainly not Imperial as claimed. This smoked Porter is slightly unbalanced, just like Scribe. It does improve with warmth, as does Scribe.

Would it be inappropriate for Scribe to say to his beer at this point: first pour, “Nice head?” Hey, Scribe was just starting to enjoy the experience, Yazoo, why did you fizzle on his fazael?

Smoked? Yes. But the smoke seems to dominate too much. Keep the level but add more malt. More malt! More malt!

Pours blacker than a moonless, starless midnight in the middle of nowhere. The mouth is met by smoke and, eventually, darker malt.

Assertive Galena and Perle? Where? The Galena may have just gone up in the smoke. The Perles must still be in da sea.

Pleasant and enjoyable, just not quite as advertised. Scribe’s advice? Let it get very warm and it will be far better. The cold hides way too much. But still: well, Scribe is unbalanced too, but he makes his living BEING unbalanced. Beer shouldn’t have to. And Yazoo? Either beef up the malt or drop some of the smoke and “Imperial.”

Vandals near downtown Houston do a grand job, but miss the point. If we were to meet Jesus in paradise, he probably wouldn’t offer any decent beer geek a Bud. That would be Hell.

(Some quotes had no source or were anonymous.)

“I’ve always believed that paradise will have my favorite beer on tap.”