Profiled by Ken Carman for professorgoodales.net

Tons of off white pillow-y foam. It was hard to fill a glass. There’s little doubt there’s brettanomyces. Despite all the dark malt that is dominant. Obsidian black and head goes on forever.
Nose is a little malt sweet and not much else. How can you have all they claim is in this beer and have damn near no nose?

A bit sour/sweet: less sour than sweet. Malt heavy but not all that distinguishable. As it warms bitter pops out, but it’s just bitter.

Mouthfeel heavy malt. This is denser than the heaviest Porter, but not quite a Scotch Heavy. No hops sensed except a slight bitter. If you want dark malt with close to no hops, no real dark malts, as in Black Patent… no hops… light carbonation in body but tons in head: this is for you.

Ommegang is a great brewery: yes, but for all the hype this is an unimpressive beer. Buy Ommegang’s namesake (Ommegang) instead if this is what you want in a beer: it’s better. More complex malt-wise. More interesting.

How can you make a beer so unimpressive, with so much malt and top it off with tons of hype?

Written by Jim Galligan for bites.today.msnbc.msn.com

Thereâ€™s something personal about a home-brewed beer. In the flavor you’ll find a brewer’s likes and dislikes, their attention to detail, their best effort at making something special with their own hands and know-how. And just like a Pixies song or a Nirvana rip, there’s usually a rough edge or two that lets you know this is something crafted by people mustering as much creativity and human precision as possible.

But when a home brew recipe is recreated on a large scale by a professional brewery â€” is that personal essence still intact? Sam Adams’ LongShot home brew competition offers the chance to find out.

Sam Adams calls for submissions from home brewers, judges them, and then brews and ships the winning beers across the country. Itâ€™s a home brewerâ€™s dream come true â€” everybody can get a taste.
END_OF_DOCUMENT_TOKEN_TO_BE_REPLACED

Written by Ken Carman for Professorgoodales.net

Like any business, brewing beer has ups and downs. And sometimes changes in society can cause a lot of trouble; especially when a business is unwilling to adjust: go with the flow. This is the story of one brewery and how it survived times when brewing beer hit major crossroads: Prohibition… and a steadily changing market: skewing towards craft beer. Not just “survived,” but did so “with ‘style.'” And “styles.” (Pun intended.) This is also the story of a family business; a family business willing to change, experiment, alter and innovate their business plans. And the story of a brewery that went with the ever-increasing nationwide flow of craft beer; go with the flow instead of against it. And go with that “flow” in a bold, aggressive, way.

Thanks to Fred Matt and a very special thanks to Meghan Fraser of Saranac for help with this article. Images courtesy Meghan Fraser and Saranac, except High Peaks Imperial six pack image courtesy Wegmans.com

Their product had been outlawed.

Recently there has been a spat of Prohibition stories in the brew-based press, and mainstream media, due to the anniversary of its repeal. But a question sometimes left unasked is, “How did some survive?” And these stories rarely, if ever, talk about how Prohibition wasn’t the only historical beer-mageddon traditional, older, long-lived breweries have had to face in America…
END_OF_DOCUMENT_TOKEN_TO_BE_REPLACED

Here at Professor Goodales we treasure the work our columnists do, so we are starting a new feature. Once in a while, we will walk through the vast digital warehouse, not unlike where they stored the Ark in Indiana Jones, and republish an occasional archived article. This is our first archived edition…

When a friend calls you and says, “I’m booking a week in my time share on Maui. If you and your wife can meet me there, you’ll have a place to stay,” what do you say? You bloody well say “YES!”

That’s how Kim and I came to be on Maui very recently, and visit the Maui Brewing restaurant and pub.

I really wanted to love Maui Brewing. I wanted to title this piece something like “Heavenly Beers in Paradise”. I mean, how could you be on Maui and not be incredibly positive about everything?
END_OF_DOCUMENT_TOKEN_TO_BE_REPLACED

Author not attributed. Written for thedailyherald.com

A brew and a bro â€” itâ€™s the classic pairing, right? Not necessarily.

From the rise of female brew masters to the growth of womenâ€™s tasting groups, women are becoming much more than a pint-size part of the brewing world.

The emergence of women as both beer-lovers and brewers happened as the craft beer scene grew overall by leaps and bounds, and thatâ€™s no coincidence, says Lisa Morrison, Oregon-based writer, blogger and author of â€œCraft Beers of the Pacific Northwest.â€

â€œI think that women are finally discovering, thanks to craft beer, that beer has flavor,â€ she says.
END_OF_DOCUMENT_TOKEN_TO_BE_REPLACED

One of the great things about writing this blog is getting the chance to talk candidly Â with brewers I respect. Having brewed a good number of sour/wild beers myself (even on my smaller scale) I know how labor intensive and how much patience you need to have as the beer and yeast go through their wild journey. Itâ€™s difficult work brewing these styles, but what is certainly just as wild/difficult if not more is the brewerâ€™s journey. Meet Brad Clark the head brewer atÂ Jackie Oâ€™sÂ in Athens, OH. Bradâ€™s very cool story of how he ended up brewing some of the finest sour and Brett beers in the USA plus some great brewing tips from this accomplished brewer in 3â€¦2â€¦1â€¦(sorry the TV news in me comes out at the weirdest times)

ETF-What beer and when was your sour beer epiphany moment?

Brad- For me that was in 2007 when I was in Chicago attendingÂ Siebel.Â On Sundays I would go toÂ The Map RoomÂ to look over my notes, do some reading and drink a bunch of great beer. The always hadÂ Rodenbach Grand CruÂ on draft. So it was that first Sunday I had it probably 2 or 3 beers in and it just blew my mind! So for 5 consecutive Sundays after that I consumed many glasses of Rodenbach Grand Cru. Thatâ€™s when I knew I had to figure out how to do something like this or at least just understand it more. So Grand Cru was the one.

ETF-Was attending Siebel your first experience in the pro-brewing world or had you brewed somewhere else before? 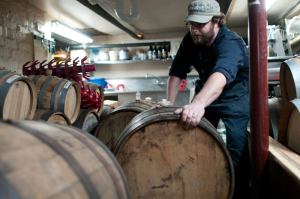 Written by Jay Reeves for AP and Detroit Free Press

BIRMINGHAM, Ala. â€“ You can buy Fat Bastard wine in Alabama, but you’ll have to go elsewhere for Dirty Bastard beer.

The state alcoholic beverage control agency said Thursday it has banned the sale of Dirty Bastard beer in the state because of the profanity on its label.

Beer and wine are commonly sold in grocery and convenience stores and anyone can see the labels, so staff members rejected the brand because parents may not want young people to see rough language on the shelves, said Bob Martin, an attorney with the Alabama Alcoholic Beverage Control Board.

“That’s the whole reason for the rule, to keep dirty pictures and dirty words away from children,” he said. “Personally, I believe the staff made the right call.”

Workers at the agency consulted sources including the Federal Communications Commission and Wikipedia to develop a list of objectionable words that should not appear on product labels, Martin said, and the list includes “bastard.”
END_OF_DOCUMENT_TOKEN_TO_BE_REPLACED